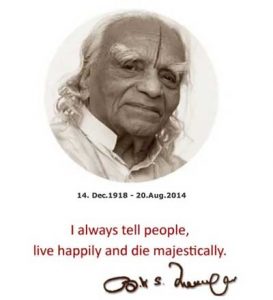 Yogacharya B.K.S. Iyengar ( 1918-2014)  created what is known as Iyengar Yoga.  He was born during a world-wide influenza outbreak in 1918 and faced many health problems as young person before he restored himself to full health through yoga practice. He began teaching yoga as a teenager. In 1943 he married his wife Smt. Ramamani and had six children. His daughter Smt. Geeta(1944-2018)  worked with Guruji closely and contributed significantly to the Iyengar Method.  Smt. Ramamani supported Guruji in his yogi efforts to teach and publish books including Light on Yoga in 1966. In 1973 Ramani passed away do to illness. The Smt. Ramamani Iyengar Memorial Yoga Institute was established in 1975 and dedicated to Smt. Ramamni Iyengar, Yogacharya B.K.S. Iyengar’s wife. Guruji created a worldwide organization network of teachers and practitioners.  During his life he gave many public demonstrations around the world, authored several authoritative texts  on yoga, and practiced yoga asana and pranayama daily

This sophisticated yoga method uses yoga props such as  blocks, straps, bolsters, blankets, and ropes only to name a few of the diverse and ingenious yoga accessories and devices for enhancing one’s yoga pose.  Not only did he teach his students different ways to practice yoga with props, but he also created a yoga teaching system. Iyengar Teachers are granted permission to teach by RIMYI(Ramamani Iyengar Memorial Yoga Institute ) in Pune, India after passing assessments developed by their national associations. There are several thousand recognized teachers in the world currently.